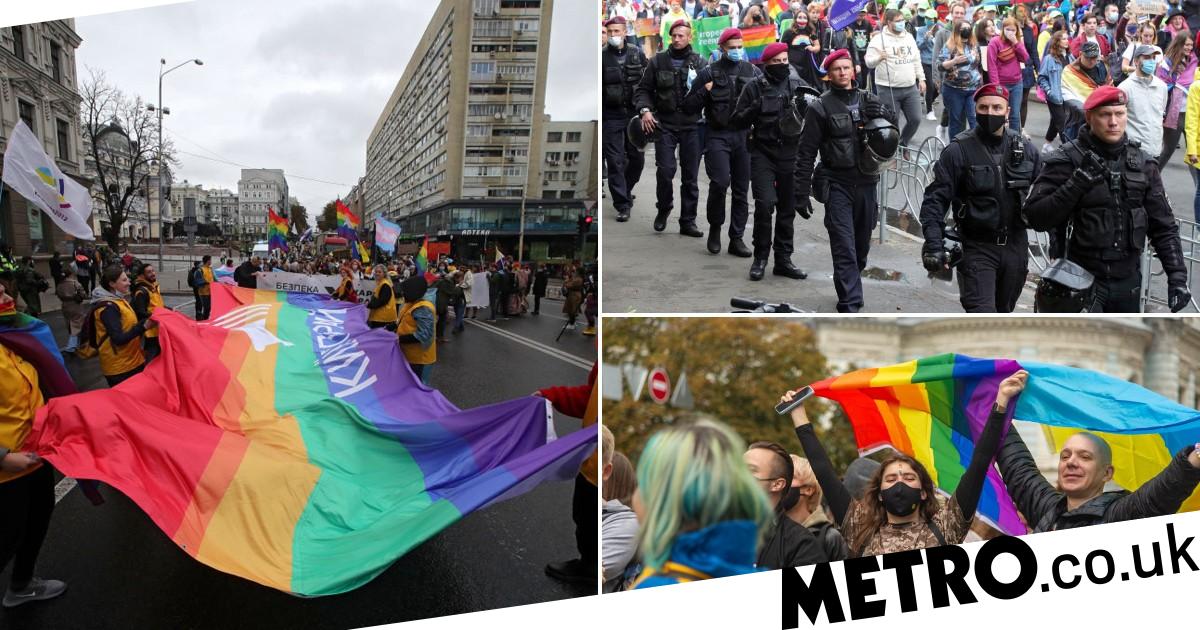 The east of Ukraine must be liberated from the Kremlin war machine or its LGBTQ+ population will be ‘erased’.

That’s the dire message to the West from Lenny Emson, the head of Kyiv Pride, an organisation working to help gay and trans people through the war.

Vladimir Putin’s attempt to capture the entirety of the country in one fell swoop may have failed but his efforts in the east and south are ongoing.

Inch by inch, Russia’s forces are taking control of Donbas, the eastern region of Ukraine which has been partly held by pro-Moscow militants since 2014, as well as in areas stretching to the Black Sea.

Progress has been slow and Moscow has paid a heavy price but around 20% of Ukraine is now under Russia control, compared to 7% when the February 24 invasion began.

For LGBTQ+ people on the other side of the illegal border that Putin is trying to score into Ukraine’s soil, the future is uncertain and it is bleak.

‘We have volunteers and activists disappearing and we don’t know if they’re okay’, Lenny told Metro.

‘We don’t know whether it’s just a connection issue or if something has happened to them. The situation is very hard right now.’

To celebrate 50 years of Pride, Metro.co.uk has teamed up with Kyiv Pride to raise money for their important work in Ukraine.

Despite war raging around them, Kyiv Pride continue to help LGBTQ+ people, offering those in need shelter, food and psychological support.

We will be splitting the cash with a grassroots charity closer to home.

You can donate here

Territory captured by Kremlin troops are plunged into an information dead zone and, in the absence of reliable communication and international observers, conditions on the ground are impossible to verify.

Many fear a similar fate to suburbs of Kyiv will have befallen towns and cities in the east – and LGBTQ+ people are more vulnerable than most.

It was only when Russian forces were driven back from the capital that the world discovered the atrocities that had been committed there, just a few miles from free Ukraine.

‘Russian forces will not allow people to connect with the outside world, they will listen to phone conversations, so if you call them on the ground, you can not say anything that would point to them as an activist, specifically if it’s LGBTQ+.

‘You can not discuss anything that would put them at risk.

‘Unfortunately what is happening in occupied territories is hard to understand, there’s no information.’

Metro is supporting Kyiv Pride this Pride month to help raise funds and awareness for the vital work they are doing during the war.

It is work which comes at a personal cost for Lenny and his team.

As well as a family to worry about – his parents are still in Odesa, a coastal city within firing range of Russia’s navy – he spends his days thinking about members of the community on the frontline.

He said: ‘I feel responsible for people who are involved with the organisation.


MORE : After 100 days of war, Ukraine is still standing but Russia is advancing

‘We had a member of the team stuck in Mariupol. We were worrying for him very much but what can we do?

‘This feeling of being absolutely helpless is just terrible, you can’t do anything and it’s just awful.’

The February invasion was supposed to break through a stalemate which had persisted in Ukraine since 2014, when Russian forces first capture territory in the east and on the Crimean peninsula.

Instead, it has produced another, with Ukraine’s army unable to fully repel Russia’s army, which itself is struggling to force a decisive breakthrough.

The attack produced a unified response from the West initially but there are signs that collective resolve is fraying.

More and more siren voices in Europe and the US are wondering out loud whether it might be better to sue for peace, give Putin some of what he wants and hope he walks away.

For Lenny, any talk of ceding land to a brutal leader who thinks nothing of trampling human rights is a ‘betrayal’.

He said: ‘We worked hard for LGBTQ+ rights and communities in these territories…if Russia occupies them, LGBTQ+ people will be erased and forced back to the closet, as happened in Crimea.

‘Before the invasion of Crimea we had a community centre in Simferopol, we used to have an LGBTQ+ movement there.

‘Where are all those people now? The community is erased, it’s deep in the closet.

‘It’s not possible to be LGBTQ+ in Russia, especially if you are Ukrainian. If Russia occupies these territories, LGBTQ+ people will be non-existent and in danger.

‘If there is even a suspicion if they are connected to LGBTQ+ they will ‘disappear in the basement’, as people in occupied territories say, and nobody will know what happened to you in this basement.

‘When politicians talk about surrender and giving territories to Putin, they do not think about this “small detail”.

‘They do not think about the destiny of people in these territories, the minorities who will be punished for who they are.’

For more stories like this, check our news page.

This year marks 50 years of Pride, so it seems only fitting that Metro.co.uk goes above and beyond in our ongoing LGBTQ+ support, through a wealth of content that not only celebrates all things Pride, but also share stories, take time to reflect and raises awareness for the community this Pride Month.

And we’ve got some great names on board to help us, too. From a list of famous guest editors taking over the site for a week that includes Rob Rinder, Nicola Adams, Peter Tatchell, Kimberly Hart-Simpson, John Whaite, Anna Richardson and Dr Ranj, we’ll also have the likes Sir Ian McKellen and Drag Race stars The Vivienne, Lawrence Chaney and Tia Kofi offering their insights.

During Pride Month, which runs from 1 – 30 June, Metro.co.uk will also be supporting Kyiv Pride, a Ukrainian charity forced to work harder than ever to protect the rights of the LGBTQ+ community during times of conflict. To find out more about their work, and what you can do to support them, click here.

Get your need-to-know
latest news, feel-good stories, analysis and more

‘Activists are disappearing’: The life and death fight for LGBT rights in Ukraine