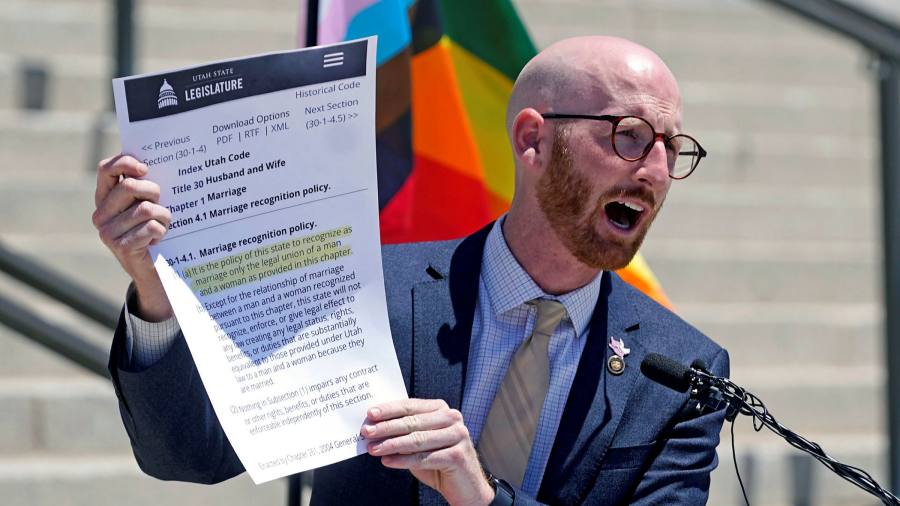 On a sunny, windy day in Salt Lake City this week, Derek Kitchen, a state senator in Utah, warned that a possible Supreme Court ruling to invalidate the constitutional right to an abortion could also threaten same-sex marriage.

Kitchen has been pushing for Utah — and other states across the US — to codify the right to same-sex marriage into law in order to shield it from any efforts to strike it down. Standing next to him and backing the effort was Jim Obergefell, the plaintiff in the landmark 2015 Supreme Court case that gave a constitutional green light to same-sex marriage.

“We need to protect the right to marry at the state level, because we don’t know what will happen at the federal level from the Supreme Court,” said Obergefell, who is now running as a Democrat for a seat in the Ohio legislature.

Same-sex marriage has become more broadly accepted by Americans — including among Republicans and Democrats who previously opposed it — compared to about a decade ago, when it had been one of biggest cultural and political battlegrounds.

Nevertheless, fears that it could be suddenly in jeopardy have flared up as the Supreme Court and its staunchly conservative majority prepares to release its long-awaited opinion on Mississippi’s ban on abortion after 15 weeks of pregnancy.

A draft opinion penned by justice Samuel Alito, which may or may not be the final one, was leaked in April, showing the court was prepared to overturn Roe vs Wade, the 1973 precedent guaranteeing abortion rights, in its entirety. Since that decision was rooted in the constitutional right to privacy and personal liberty under the 14th amendment, some fear that other rights that fall under the same category could also be vulnerable to being upended.

“Overturning Roe opens the door to restricting those rights. It would be a direct assault on the fundamental right to self-determination, to live and love without interference from the government,” she added.

Democrats have been keen to point out the broader ramifications of a Supreme Court decision to overturn Roe vs Wade as they try to depict Republicans who backed and voted to confirm the conservative majority on the Supreme Court as extreme ahead of November’s midterm elections.

Some Republicans have pushed back, arguing that any abortion ruling should be interpreted much more narrowly and is unlikely to lead to any further push to upend same-sex marriage or other rights that were established over the past half-century.

But Mitch McConnell, the top Republican in the Senate, has been much more circumspect. “I don’t have any advice to give the Supreme Court. They shouldn’t take my advice,” he told NPR when asked if the court’s expected thinking on Roe could be applied to other issues. “Their job is to interpret the law as best they can.”

The legal question that would be thrown open by a decision to overturn Roe vs Wade is whether any personal rights that are not explicitly mentioned in the constitution — so-called unenumerated rights — can be protected, or whether these could be rolled back at the state level.

“What I’m really concerned is going to happen is that this will further inspire advocates and conservative lawmakers in states that have already demonstrated hostility to LGBTQ people to begin to attempt to pass laws, either chipping away at or completely attempting to undermine marriage equality,” said Sarah Warbelow, legal director at the Human Rights Campaign.

However, she also notes that any spillover from the Mississippi ruling to other issues including same-sex marriage would take some time to make its way through the judicial system, and the courts may take different views in different situations. For instance, the Obergefell ruling on marriage equality was also based on the equal protection clause of the 14th amendment, giving it an additional shield against being overturned.

“We are hopeful that if . . . Obergefell is challenged in the US Supreme Court, [the court] will take seriously the question of equality before demoting LGBTQ people to second-class citizens,” said Janson Wu, executive director of Glad, which provides legal services to the LGBTQ community.